The following is an essay on the experiential learning benefits of live-action roleplaying games such as Adventure Quest. It is written by the person who began Adventure Quest, in Colorado in 1995.

By Mark Hoge
Founder and director of Renaissance Adventures, creator of Adventure Quest. 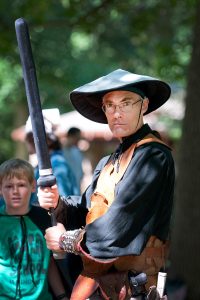 I’ve been a fan of roleplaying games (RPGs) since I was introduced to Dungeons and Dragons (D&D) in the late 70’s. As a teen, RPGs gave me a creative and social outlet I couldn’t find anywhere else. Throughout my 20’s, I played various RPGs as a hobby, and during that time I spent most of my summers working with children at camps and apprenticing with inspiring teachers.

When I discovered live-action roleplaying games (LARPs) in the late 80’s, I recognized their potential as an experiential learning tool for kids and teens. While directing summer camps from 1990-1994, I experimented with a simple Native American themed LARP using foam spears, daggers, and arrows. The impact on those kids made it clear to me that a well-run LARP or RPG can challenge kids in diverse ways – physically, intellectually, socially, morally, and ethically. The youth were passionately engaged in the LARP. They learned a lot about themselves and others. I discovered then that roleplaying is an incredible tool for learning cooperation, teamwork, decision making, creative problem-solving, and self-esteem. LARPs, run in a certain style, encourage and support self-confidence, cooperation, critical thinking, and communication skills, and the kids have a blast!

I moved to Boulder in 1995 and founded Renaissance Adventures with the dream to lead quests and inspire youth to learn through play. Since then, I’ve worked with hundreds of adult leaders and thousands of children and teens, co-creating a fun and inspiring experiential learning program through LARPs and tabletop RPGs.

Over the last twenty-two years of developing LARP experiential learning programs for children and teens, I’ve seen what works and what doesn’t. Listed below are a few of my discoveries.

1. Participants learn when they are wholeheartedly engaged

LARPs and RPGs have the potential to offer an exciting, engaging story that captures the attention and passion of participants. You can do this by including the following elements:

2. Participants learn when they have frequent, impactful decision-making opportunities

LARPs and RPGs offer frequent decision-making opportunities that have a large effect on the characters, world, and story.

In seeing how a well-crafted LARP is different than most standard RPGs, Consider the old-school gaming model of the dungeon crawls. The plot is often the same: open the door to the north; slay the evil monsters; get the loot; level up your powers; repeat. Not many decisions need to be made in that kind of adventure. Now compare it with a more complex situation that involves different political realms, races, and the conflicting needs and goals of diverse people. This more complex and realistic way of setting a storyline fuels an amazing, dynamic environment that requires creative problem-solving, ethical decision making, planning, and teamwork among the players.

For example: The Ridgeback Dwarves tell tales of how the goblins of the Amber Forest are vicious, cruel murderers. When the Questers investigate, they discover that the goblins are simply protecting their harvesting ground from the dwarves’ wood-cutting forays. The goblins eat the fruit that grow on the trees, and hunt squirrels. The dwarves need wood for their forges and hearth homes.

The example above is not complex – it is a very simple example. However, it gives the players the opportunity to perceive what’s really going on and to try to come up with a win-win negotiation for both races. A few solutions seem obvious when the goals are spelled out so clearly, but of course, learning the goals and motivations are a part of the learning process and the fun of the quest. If the players do not attempt to learn what is going on and think beyond what they are told by the Ridgeback Dwarves, they may charge in to slay the “murderous” goblins, akin to the typical old-school gaming model. The consequences for this blindly simple action – slaying the goblins – will create consequences that the players and dwarves must face. Perhaps a few goblin survivors escape and rally other, more fierce goblin tribes to take back the Amber Forest, and hunt down down the players in retaliation. Just think of the multitudes of lessons that participants can learn with this scenario.

Children often let their emotions create an “us versus them” structure of morality. The mentality for many kids is: If a classmate takes a toy, the classmate should be punished immediately and severely. If a villain attacks a village, the villain is evil and must be killed. LARPs can reveal that most “villainous” motivations should not be viewed in such a black-and-white dichotomy. Villains do not need to be evil, and morality does not need to be portrayed as absolute. Instead, the so-called villains in a quest have complex motivations and goals. Astute Questers can puzzle out the true motivations of the characters they meet, and by seeking the best means of resolving a conflict, they can enact unique and creative solutions to the dilemmas they face in the quest and on the playground. This kind of discernment, and the resulting negotiations and problem-solving, translate into skills the players can use in real-life challenges outside of the game.

4. Participants learn when supported by a physically and emotionally safe environment

When the Quest Leaders and LARP support an environment that is physically and emotionally safe, players can relax, engage, play, and learn. Physical safety is straightforward – if you are sword dueling with foam Swashers, point out potential hazards (such as rocks and trees), and get an agreement from the participants to follow the swasher dueling safety rules.

Emotional safety takes a lot of experience and skill to support. If players are bullying, name-calling, taunting, putting down other people’s ideas, or teasing, then everyone in the group may not feel safe unless that behavior is dealt with swiftly, clearly, and with compassion and fairness. How to do that is a complex subject that is beyond the scope of this article – Renaissance Adventures has developed a program called Inspiring Invitations™, which explores this issue.

However, here are some tips:

Develop the skill of giving consequences rather than exacting “punishments.” In my opinion, this is probably the most important conflict resolution tool I know. While what follows are some ways to portray consequences, the full method is beyond the scope of this article.

If you can understand how to give consequences in a fair, respectful, and firm way then your relations with people will transform, and you’ll find yourself with much less frustration.

5. The Difference between LARPs and RPGs in Experiential Learning

Both LARPs and RPGs provide great opportunities for learning. If you are willing, I have found that LARPing is a superior tool for experiential learning because, rather than sitting and rolling dice, participants are running around, swinging Swasher swords, throwing beanbag spell packets, and acting out their characters in an embodied expressive way. That level of physical engagement and kinesthetic learning vastly increases emotional engagement and holistic learning. At Renaissance Adventures, we run our Adventure Quest™ and PlayQuest™ LARPs differently than most adult LARPs – our approach is more similar to how tabletop RPGs are run. One Quest Leader (QL) facilitates the adventure for a group of 4-6 players (Questers). The QL playacts all of the creatures and monsters that the group encounters, sometimes with the help of one or more Teen Leaders. The Questers work together to solve the mysteries of the quest. In this relationship, the QL can fully enter the role of mentor and educator – not just a mere “game master.”

6. The Impact of Swasher™ Sword Dueling

The Swasher equipment in our Adventure Quest LARP programs are extremely popular among our Questers. They love to sword fight! And why is that? First, it’s fun! Beyond that, kids are physically small and have comparatively little power and responsibility in a world of big people telling them what they can and can’t do. This leads many children to feel disempowered. Disempowerment can present itself as a lack of self-esteem, confidence, and determination. It can also force children to withdraw into insecurity and shyness, or to overcompensate by becoming a bully or blindly rebellious to authority figures. Sword is seen as a tool of power that is very attractive, symbolic, and meaningful to the kids.

We’ve found that Swashers can be a very useful teaching tool to awaken a respect for physical and emotional safety, and an awareness and understanding of the bully-victim dynamic. Our Quest Leaders use the LARP and Swashers to bring awareness to these dynamics and other issues like competition. The QLs role-model how to play fair and be empowered while simultaneously being respectful and compassionate. Those children who are unconsciously or consciously hurting others with their swords or with their words become highly motivated to act less impulsively when faced with the potential consequence of not being allowed to use the Swashers– their symbol of power. In other words, they are given the chance to act responsibly with their power, and if their actions become unsafe, their symbol of power is suspended until they can learn to act safely.

7. The use of LARPs and RPGs in Education

I believe that interactive storytelling and roleplaying can truly transform traditional education. One of the long-range goals of Renaissance Adventures is to partner with educators and summer camps, creating a product line of books and training programs that support teachers and counselors to use these tools in the classroom and camp setting.

If this article inspires you, then consider how you can use your passion for games or experiential learning to help others. Who do you like working and playing with? I have a friend who volunteers at an in-house treatment facility for teens with substance abuse issues. He leads a tabletop roleplaying game with the teens once a week. The teens really appreciate the gaming, and he gains the satisfaction of knowing that, not only is he bringing them some joy and play, he’s facilitating their learning and growth.

I was once asked by a parent of a four-year old if I could help the boy stop his daily habit of hitting other kids. I met the boy for an afternoon of play, and I never even mentioned his bullying behavior. He and I hiked into a park with Swasher swords, and within the LARP, the boy – his character – witnessed an ogre bullying a small fairy. Seeing the poor fairy’s fear, hurt, and tears, the boy chose to defend her against the ogre. Then he started talking with the ogre and eventually befriended him. By interacting with the ogre within the context of a simple LARP, that boy learned to step into a different role than the bully, learning a tremendous amount. His habit of hitting kids was transformed by one afternoon of roleplaying.

I hope that this article will be useful and inspiring, and that we can revolutionize children’s education through interactive, kinesthetic storytelling – through a live-action roleplaying game. Thank you.

To contact Majestic Adventures regarding this article or any idea surrounding experiential learning through live-action roleplaying games, feel free to contact us! Thank you for reading, and may your adventures be heroic!